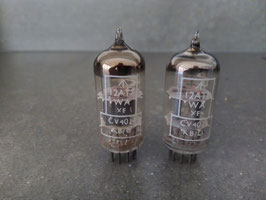 Mullard CV4024 made in the UK 1965 for the RAF single support O-getter with old shield logo of Mullard Mitcham factory matched pair 10,0/10,0 mA and 5000+ uMhos so NOS testing. What a difference these tubes make! Equivalent of 12AT7 and all ECC81 types. The NOS Mullard CV4024 tube is low noise and long lasting. This 12AT7 tube is a very good choice for hifi preamps, driver stages, and guitar amp reverb circuits. The Mullard 12AT7 is original production from Great Britain. Price is for one matched pair of 2 tubes. Quads matched also available! 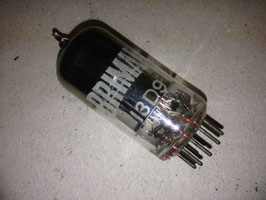 For sale are ultra rare Brimar 13D9 equivalent of ECC81 12AT7 and other ECC81 kind of tubes. Made in UK 1950's. Tested and matched on Amplitrex AT1000. Brimar 13D9 Black Plates - These are also special, and were exceptionally rare, almost mythical status until recently when a few thousand or so were discovered at an airbase in Britain. These 1950's era black plate dual triodes were designed as a highly ruggedized valve for special forces high sensitivity field surveillance radios and post WW2 piston-engine airplanes which were still being used worldwide, especially in Korea, and later Vietnam. These tubes were never released for general public use, and therefore considered among the rarest of mythical beasts. Some knew they once had seen them during their military service – and they knew how good they were – so while missing were often spoken of reverently, sometimes with secrecy, and even then - only within the smallest of veteran tech circles. Since they were never seen past their military service, many thought they possibly may have been an anomaly, or possibly never really existed, especially since they were never really seen by anyone other than aviation, shop technicians and special forces radio maintenance techs for well over half a century - virtually unknown before the mid-2000's when suddenly a few boxes got re-discovered in a warehouse in Great Britain. It took another decade for them to be released. They were apparently small batch, only made for very special secret military radio use. They belong on the top-25 list of the best 12AT7/ECC81 variants on the planet – but of course there weren’t any around until recently. Once the top choice of M5 and CIA European field radios, and black site radio use. Price is for 1 matched pair of 2 tubes. 25 matched pairs available! As of July 23th 2021. 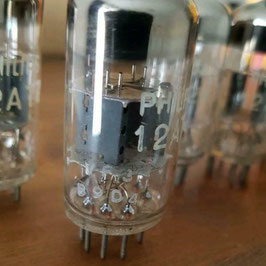 Philips ECC81 equivalents of 12AT7 6201 5965 6829 etc.. Made in UK, Mullard Blackburn factory very rare tube. 3 holes in the side. 1960's. VF3 BXXX factory code. 4 matched pairs available! Tested on the Amplitrex AT1000. Price is for 1 matched pair of 2 tubes. Code: VF3 BXXX Blackburn, U.K.  Characteristics: - plate with three side holes. Comment: Quite rare. Also seen as CV455. This is your change to score some really extaordinary tubes wich are very rare to find these days! 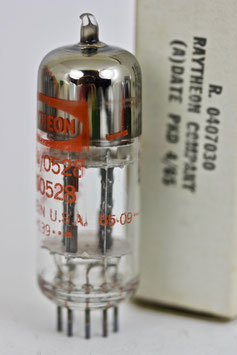 These 6414 were made and tested by Raytheon USA. This is high grade valve was selected for computer circuits and was used extensively by IBM and the American Military. The 6414 was only made in the U.S.A and has a 10,000 hour heater rating. It has the red Raytheon print and this is the 3 mica version, highly recommended for it's HIFI quality's. Very rare and in demand. The 6414 Raytheon was selected  as It is a more ruggedly built, offers long life rating and is made to full military specifications.  This valve is used by Manley Labs in a number of its studio products such as Voxbox, Massive Passive, ELOP, Mono and Dual Mono mic pre, SLAM, and Pultec EQ. Manley also use the 6414 in audio products such as Stingray amps and MAHI monoblock. This valve is used by many of our professional studio customers using Manly equipment. Limited availibility. Matched pairs on the Amplitrex AT1000. Price = for 1 matched pair of 2 tubes! New in 30 October 2020: 10 matched pairs for sale!! 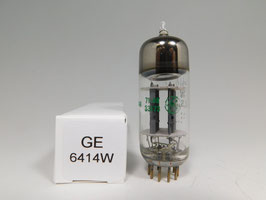 NOS 'made in USA' 1987 Yet another industrial tube that is very similar to the 5965. This one has a mu factor of 47 so it is slightly lower than the typical 12AT7. Those I have heard are rich, detailed, warm, and thanks to the lower mu, very quiet and low in microphonics. If your standard 12AT7 or ECC81 is 'noisy' or gives to much amplification it's time to start rolling some tubes! Made for the militairy by GE they are a rugged and long lasting tube. Like the E180CC, this tube is about a 1,5 cm taller than the 12AT7, so you need to consider is there's space in your chassis. An excellent audio bargain! Longlife 10.000 hours. Price is for one matched pair of 2 tubes. Matched pairs @ 1% available.  25 matched pairs available! 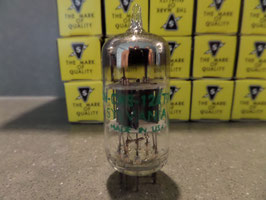 NOS made in USA 1963 week 21 black plates O-ring getter matched pairs of this militairy specs tube. Tested on the Amplitrex AT1000 to NOS values. Excellent sound from this black plates. These are very musical tubes with air and sparkle at the top end, warmth in the mids, and great bass. 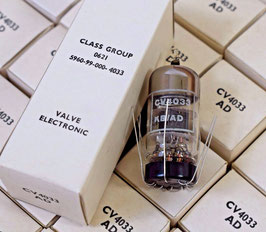 Very rare NOS 1960's black plate Brimar CV4033 substitute for ECC81, 12AT7, 6060 and all other ECC81 substitutes. Made in UK for Britisch militairy forces (RAF) these are longlife heater tubes 10.000 hours. Sound is fabulous! Like Mullard and real New Old Stock. With flying leads and if wanted with a adapter. Very rare and in demand. Tested and matched on the Amplitrex AT1000. On the boxes is a date stamped: 10 OCT 1971, so really 50 years old! NOS stuff. 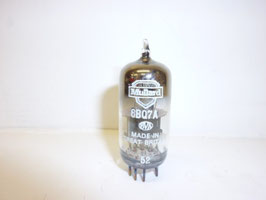 6BQ7A Mullard has the old style shield logo and is printed made in Great Britain. The valve has the early black anode and offers excellent quality . This item has been very popular for use in studio equipment over the years, such as original Chiswick Reach Compressors. More recently it has been a popular in headphone amplifiers such as the Schilt USA Headphone amplifiers.  Sold in matched pairs  from a box of 200 NOS tubes and available in matched pairs @1% and balance triodes offered at a very competetive price. Can also replace a ECC88 6DJ8 or 6922 tube! typical test results are 9,0/9,0 mA and 6600/6600 uMhos.

Just arrived! NOS 1960's Valvo ECC81 12AT7 made in Germany 'probably Hamburg' part of Philips Germany. Excellent NOS sounding scarse ECC81 tubes. Matched on Amplitrex AT1000. Price is for 1 pair of 2 tubes. Rare and in demand! 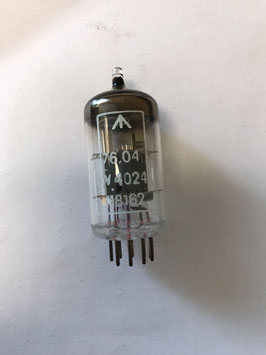 Made in Germany NOS 1970's made for NATO and RAF these big bottle RFT CV4024 aka ECC81 or 12AT7. Matched at 1% with balanced triodes on the Amplitrex AT1000. A serious upgrade on standard stock tubes! Price = for a pair of 2 tubes matched. Double supports, O-getter extra heavy thick glass bottles!

NOS USA made for US Government 80's longlife high quality Philips ECG 12AT7. Replaces ECC81 and equivalents. legendary tube, 'new old stock' very good sounding tube. Matched for a unopened box of 100 tubes on the Amplitrex AT1000. Make sure to buy this future classical tube now for reasonable prices! Prices are for a matched pair of 2 tubes. Tests extremely good on the Amplitrex AT1000 in autobias mode 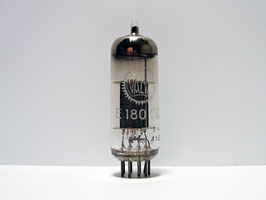 NOS German Philips Miniwatt branded Valvo brand tubes from the factory in 'Heerlen' Netherlands. NOS 1960's made special quality longlife 10.000 hours tube. A high quality replacement for 12AT7 or ECC81 tubes. Pair is for a matched pair = 2 tubes. Or for 'hot voiced' ECC83 amplifiers who need to be tamed. 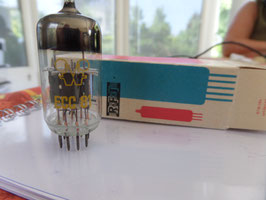