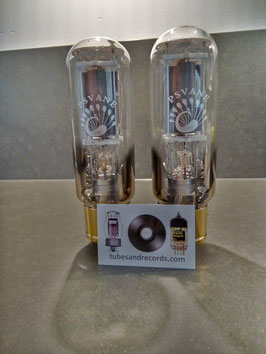 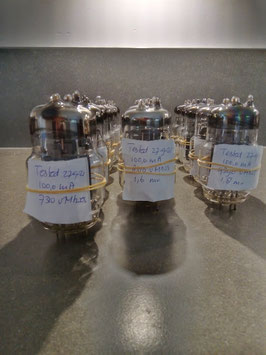 Uljanov 6C33C old logo 1960-1970 . In 1976 a Mig 25 fighter jet landed in Hokkaido in Japan, it was flown by a soviet military pilot that wanted to defect to the west. This was a real field day for western miltary people as not so much was known about the MIG 25 and the plane was completely dismantled.

Two things startled the military analysts in the west, the first was that the plane was built using a lot of high tension steel, it was earlier thought that the MIG 25 was built in Titanium to withstand the heat that is generated by flying at mach 3 that the plane was capable of, that it was built in steel made it heavy so the performance was actually less than expected.

The second thing that surprised people in the west was that electronic tubes was used in some parts of the radio equipment. After a while it was understood that the tubes where used so the plane should be able to withstand EMP. An EMP, (Electro Magnetic Pulse) is generated by the detonation of a large nuclear bomb in the atmosphere, the electric field so generated destroys most solid state electronics and EMP is thought to be used as a possible electronic warfare measure.

In the power supply of the main radio unit of the MIG 25 a previously unknown triode tube was used, the Soviet military designation was 6C33C and it was a voltage regulator triode. The data of this tube was much better than anything made before in the west and SanEi of Japan imported some 6C33C tubes for audio application in 1997, renaming them EC33C for the Japanese consumer. Mr. Dakesue in Japan was the first person to design a 6C33C-B OTL power amplifier circuits in 1977.

The main characteristics of the 6C33C is that it has very high transconductance, high current capability and low internal resistance and also as the tubes where intended for use in miltary aircraft they are mechanically very robust. The nearest western equivalent is 6336 but data of 6C33C is better.  All tubes are tested on the Amplitrex AT1000 tube tester after some serious burning in time. 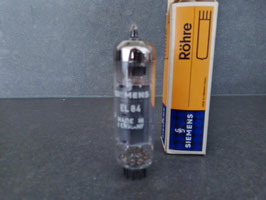 Available for sale are NOS testing Siemens EL84 tubes with Siemens code on it. Some come with original boxes some in white boxes. Most have good print, some kM4 codes, some other codes. Tested on the Amplitrex AT1000 testing 48,0 mA and minimum 10000 uMhos and maximum 11800 uMhos. 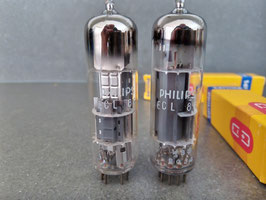 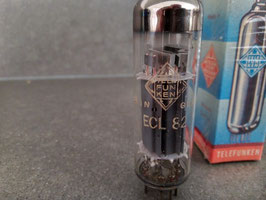 For sale is offered one (1) rare Telefunken ECL82 tube NOS with <> in bottom of the tube with original box. 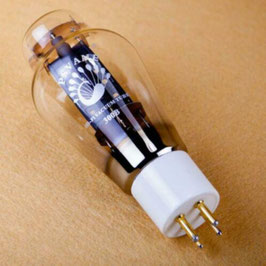 For sale are offered single tubes, matched pairs or matched quad of the Psvane 300B 'HIFI-series' made in China. A good sounding tube! 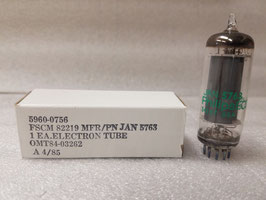 NOS Philips 5763 replaces the famous EL84, 6BQ5, 7189, 6P14P but has a different pinout. Made in the 80's it's a cost effective replacement when NOS EL84's are to expensive.  I matched all tubes on the Amplitrex AT1000. From gold to platinum + all macthed tubes are available. USA NOS Philips Sylvania US Government contract. 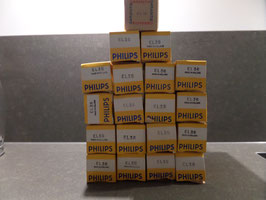 For sale are Philips Miniwatt power pentodes EL36. The EL36 is a purpose designed line output valve for television receivers. Most TV receivers were AC/DC designs that did not employ mains transformers and had the heaters in series across the mains. In the UK, with 240 V mains, a 300 mA heater chain was common. 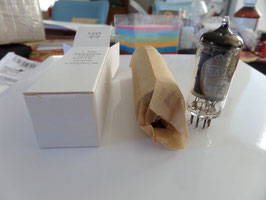 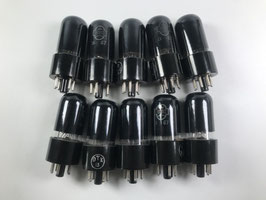 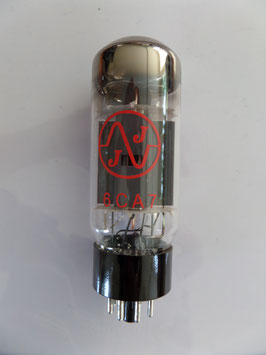 JJ 6CA7 tubes are a little more powerfull then the classical EL34 from JJ. These tubes are matched at 1% on the Amplitrex AT1000. A good solid tube for power amplifiers and gitar amplifiers. Comes with new clean boxes. 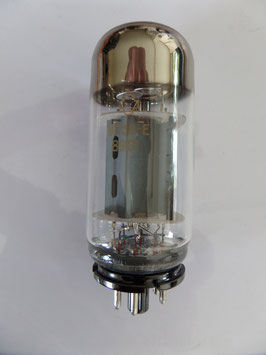 Reflector 6P3S-E no known substite but can replace tubes like EL34, KT66. This is the longlife 5.000 hours 'coin' base version. Because of it's rugged construction it can also be used in gitar amplifiers with 450V powersupply's. Often referenced as a SOVTEK 5881. A good and solid alternative for more (to) expensive NOS EL34, KT66 etc..  Can be matched in 1% pairs, quads and octets. Russian 6P3S-E are equivalent to 6L6 = 6L6GT = 6L6GC. Soviets cloned these several decades ago. The tubes are NOS (New Old Stock), rather vintage but in an excellent electric condition. A secret *tip* for owners of Audio Innovations and also Quad II. Price is for one (1) single tube! 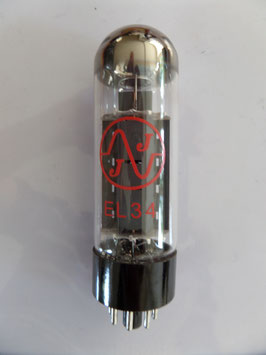 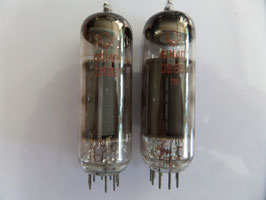 Russian 80's NOS production matched max. 3% on Amplitrex AT1000. Reflector factory. Solid good sounding tubes. 6P14P is 100% equivalent of the EL84. Can be delivered in matched pairs, quads, octets if requested. Price is for a single tube. 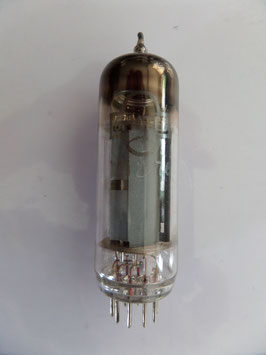 Russian 80's NOS production matched max. 1% on Amplitrex AT1000. Reflector factory. Solid good sounding tubes. 6P14P-EV is 100% equivalent of the EL84, 7189, 6BQ5. Longlife 10.000 hours. One of the best still available NOS. Can be used in receivers , gitar amplifiers, juke boxes with 450V powersupply like an 7189. Gold grid. Can be delivered in matched pairs, quads, octets if requested. Very rugged tubes. Price is for a single tube. 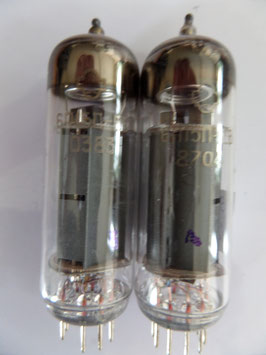 Russian 80's NOS production matched max. 3% on Amplitrex AT1000. Reflector factory. Geheim-tip! One of the most linear tubes available. SET. Can replace a EL84. Also equivalent of EL83, SV83. Tesla. Some US tube amplifiers use these single ended. Longlife 5.000 hours. 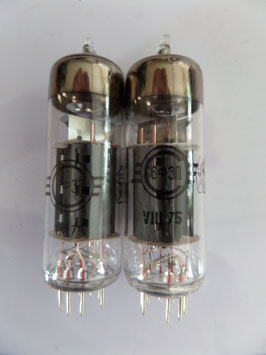 Russian NOS 80's production Svetlana winged = C=. Very good sounding ECL82's for example the Audio Note amplifiers. Matched on the Amplitrex AT1000 max. 3% in pairs and quads. Can replace 6F3P and 6BM8. Price is for a single tube. 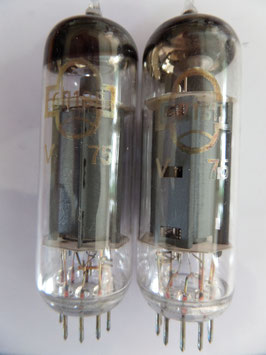 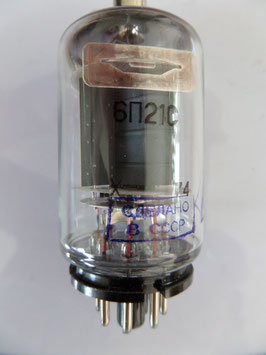 Russian NOS 1974 unknown beam tetrode with top cap connection. No western equivalent. About 18 watts. 'Coin' base. Excellent tube for DIY tube amp projects. Not expensive. This is a great unknown Russian DHT. An output beam tetrode with direct heated cathode filament. This 18 watt valve is a great candidate for an output stage, with its standard filament voltage of 6,3 volt and octal socket, many ones out there will be really attracted by this valve as it can easeliy be adapted in many classsic output stages. 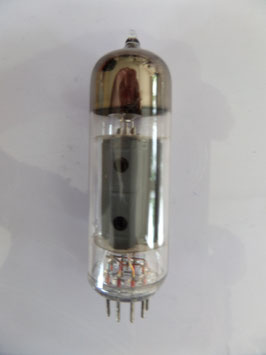 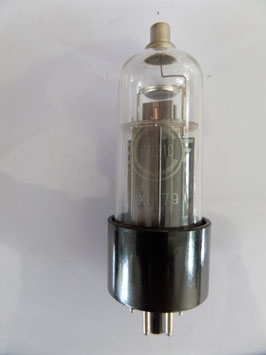 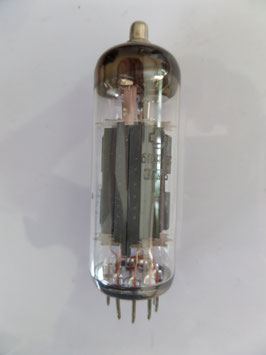