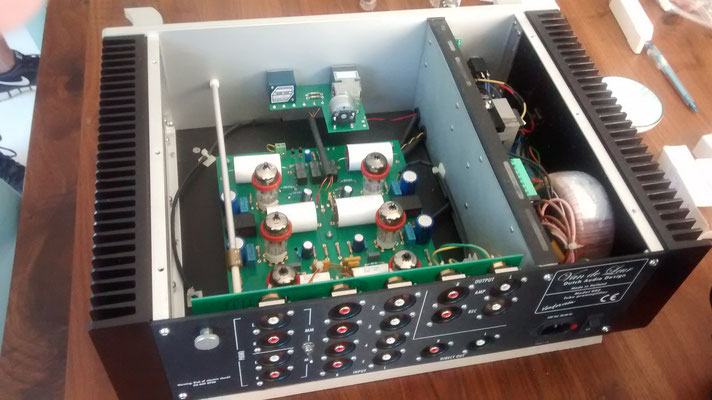 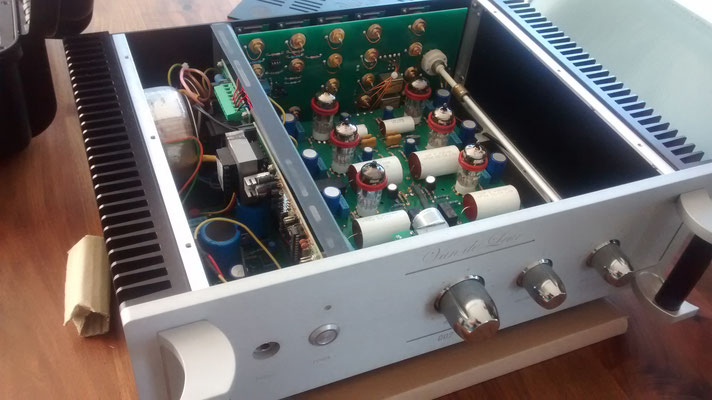 Yesterday I had some brothers from Schiedam visiting me with their Van de Leur 002 tube preamplifiers. Van de Leur is a smal Dutch company building tube amplifiers and class D power amplifiers with some assistence of Menno van der Veen, known for his famous toroidal transformers.

The  guys joined me for a check on the pre amp. It made noise when turning up the volume. Also 'the trumpets' sounded a little bit raw when played.

Surprisingly I found out they had Electro Harmonix tubes inside, 12AT7 or ECC81. Strange, because in a amplifier of allmost 5000 euro you expect NOS tubes. First I checked all tubes on the Amplitrex AT1000. No problems here, although some EH's scored no more then 70%. After checking all tubes the conclusion was: no defected tubes.

Then I cleaned all sockets with Deoxit and all pins of my recommended ECC81 RFT CV4024. Gone were the cracking noises when touching the volume pot. I give the tubes 2 tube dampers each to dampen microphonics. Happily the brothers got home, happy with the results.

Some thoughts though on the EH ECC81. This is a serious undergrading of the possibilities of this amp. The Van de Leur deserves better tubes, preferably NOS selected on noise. Secondly, when closely inspecting the inners of the Van De Leur you see 'big white bottles' coupling caps called. I could not see any name on it, but could imagine, better sound can be achievd by using the ClarityCaps 0,1 uF/630V instead of this 'no name' caps. Combined with the D400 amplifier class D one has to be careful not to have a to analytical sound.

Later on we also tried Mullard 'copper anodes' and Valvo E180CC instead of the CV4024. But these all produced noise when touching the volume pot. Surely there is a problem with grounding the tubes or volume.